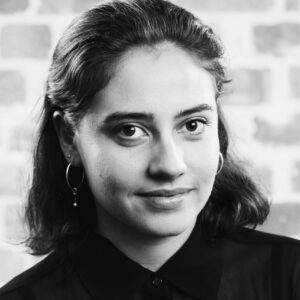 Sarah is the Development Producer at Goalpost Pictures, where she manages the company’s film and television development slate. Sarah has worked on productions such as NEW GOLD MOUNTAIN (SBS TV, All3Media International), Unjoo Moon’s I AM WOMAN, Wayne Blair’s TOP END WEDDING, FIGHTING SEASON (Foxtel, Skyvision) and CLEVERMAN (ABCTV, SundanceTV) and Neil Armfield’s HOLDING THE MAN. Sarah has a background in law, previously working as an entertainment lawyer at Media Arts Lawyers. Sarah holds a Bachelor of Arts in Communications and a Bachelor of Laws from UTS.

Goalpost Pictures are among Australia’s leading and award winning independent producers. At Goalpost Pictures we believe the key to our success is strong enduring relationships with distinct, creative voices. We are committed to providing an environment where unique producing, writing and directing voices can blossom.

Goalpost prides themselves on producing scripted films and television shows that are noisy, bold and have something to say. We describe ourselves as genre agnostic, but are always on the hunt for new concepts with a strong hook, which shed light on an important subject matter, and give an extraordinary writer and director a voice. We want to make projects which entertain and move audiences, through tears, laughter or preferably both.

We do not produce any lifestyle, documentary or non-scripted content. We are not looking for animation concepts, sci-fi or horror material.