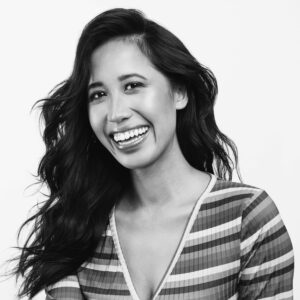 Michelle Cheng is the SBS Content Industry Diversity Manager for TV and Online content and the Co-Chair of the Screen Diversity and Inclusion Network (SDIN). At SBS, Michelle is working to improve career pathways for diverse TV creatives, investigating international best practice for screen diversity and rolling out The Everyone Project at SBS, which aims to measure diversity on and offscreen on all commissioned productions.

Michelle has a background in TV presenting/writing, journalism and law (as an Australian solicitor). From 2016 to 2020, she worked with ITV Studios and Channel 7 as a television writer on the quiz show, The Chase Australia. In 2018, she was an ABC TV panellist on the quiz show Think Tank in over 75 episodes.

Michelle also has extensive experience as a journalist with by-lines in The Guardian, ABC, Yahoo News and the Daily Mail Australia. She also worked in world news as an Assistant Reporter/Researcher for the major Japanese newspaper The Asahi Shimbun, shooting stories on-location across the Australia Pacific region.

Most recently, she was a Media & Communications Advisor at Monash University. Outside of the media world, Michelle has experience as Curation Coordinator for TEDxMelbourne and as a Creative Writing Teacher at Laneway Learning.