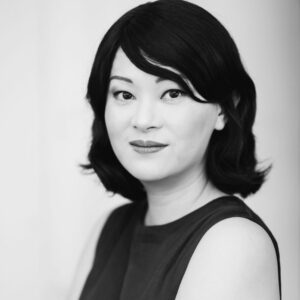 Michelle Law is a writer with experience in journalism, screenwriting and playwriting.

She wrote the highly acclaimed play Single Asian Female – commissioned by La Boite Theatre Company – which earned 5-star reviews before transferring to a sold-out season at Belvoir St Theatre in 2018. The show returned to La Boite with Michelle performing in it, and toured to Melbourne. In 2021, Auckland Theatre Company staged an original production of the work. Her commissioned play Miss Peony will premiere at Belvoir Street Theatre in 2022.

Michelle co-created, co-wrote and starred in the series Homecoming Queens, the first web series commissioned by SBS On Demand. The series won Best Web Series at the Australian Writers Guild awards, Best Screenplay at Melbourne Web Fest, and Best Performance in a Comedy series at the Equity Ensemble Awards. It was also nominated for Best Online Video or Series at the AACTA Awards.
As a screenwriter, Michelle has worked on shows for television networks such as the ABC, SBS, Fox8, Network 10, and The Nine Network. Some of her television credits include Get Krack!n (ABC), The Bureau of Magical Things (Network 10) and Rosehaven (ABC).

Michelle is also an advocate for social causes and has presented a TEDx talk, as well as being a prolific speaker about issues concerning intersectional feminism, cultural identity and race, and youth issues. She wrote the short documentary Suicide and Me (ABC2) which aimed to create more conversations about suicide prevention in Australia.

Beyond performance writing, Michelle is a successfully published author. In 2016, she won the Queensland Premier’s Young Publishers and Writers Award. She has written for many magazines, journals, and broadsheet newspapers including frankie magazine, The Griffith Review, and The Saturday Paper. Her stories and essays have been anthologised in books such as After Australia, Best Australian Comedy Writing, Destroying the Joint, Women of Letters, Growing up Asian in Australia, and more. In 2014, she co-wrote a comedy book called Sh*t Asian Mothers Say with her brother Benjamin Law.

Michelle is currently working on several theatre commissions, as well as feature and television projects. Her novel, Asian Girls Are Going Places, is published through Hardie Grant.