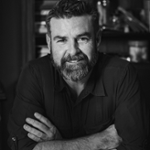 Nathan Mayfield is the Chief Creative Officer and co-founder of Hoodlum, an Emmy and BAFTA Award Winning Production Company. Hoodlum operates their offices in Brisbane, Australia and in Los Angeles, developing feature film and television drama projects for the international marketplace. Mayfield has been the creative force behind Hoodlum’s multiplatform, television series and feature film work. He has worked alongside his co-founder Tracey Robertson to expand the business across the globe and across many different mediums. In 2017, Nathan produced the feature film AUSTRALIA DAY for Foxtel, released theatrically through Icon Film Distribution and launched a VR documentary, INSIDE MANUS, for SBS. Hoodlum’s TIDELANDS, an 8-part series for Netflix, was Netflix’s first original TV series for the territory, and launched globally in December 2018. Hoodlum is currently in production on the second season of FIVE BEDROOMS, an 8-part series for Network Ten, distributed by NBCUniversal Global Distribution, and has finished airing the third season of HARROW, a 10-part series with ABC Australia and ABC Studios International. HARROW was ABCSI’s first scripted production outside of the US and both seasons are currently streaming on Hulu in the US.