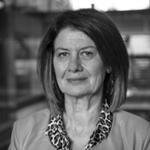 Lyn is Head of Producing and Production at the Australian Film Television and Radio School. In 2020, she worked with the Screen Industry National Taskforce to develop the COVIDSafe Production Protocols for the screen industry. An experienced producer, Lyn’s credits encompass drama and documentary film and television productions. She produced the feature film Undertow (2018) which premiered at the Melbourne International Film Festival and the Edinburgh Film Festival and Hot Mess (2018) which screened at the Seattle International Film Festival. She is executive producer of Here out West (2021) an anthology feature film featuring 8 talented writers from the western suburbs of Sydney working with award-winning directors Leah Purcell, Ana Kokinos, Lucy Gaffy, Julie Kalceff and Fadia Abboud.

We are looking for features and episodic series with a fresh, bold edge – stories we haven’t seen and voices we may not have heard much from.

We are not looking for childrens, lifestyle entertainment, branded content