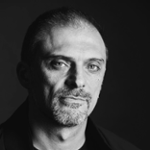 A versatile filmmaker, Enzo is recognised among his peers as a prolific and innovative Producer, Director, and Writer.

Enzo joined forces with Julian Harvey to write and produce The Tunnel – a project whose innovative approach to funding and distribution saw it hit international cinema screens despite being crowdfunded and simultaneously given away for free online. In addition to reaching a massive global audience, the film garnered Enzo and Julian the Screen Producers Association of Australia Award for Breakthrough Independent Producers Of The Year.

As a Director, Enzo made his theatrical feature film debut with conspiracy thriller Event Zero and was also a co-creator of A Night Of Horror Volume 1. He was an Executive Producer on Megan Riakos’ Dark Whispers Volume 1.

Enzo created the multiple award-winning online conspiracy thriller series Event Zero (upon which his feature film directorial debut was based), science fiction series Airlock, as well as Producing several productions for the Blackpills mobile streaming platform including Skinford, Skinford Chapter Two. His ongoing commitment as a Creator in the web series space and his work within that community earned him The Michael Ajakwe Jr Lifetime Achievement Award from Melbourne WebFest.

Enzo is the Showrunner of the Shudder Original Series, Deadhouse Dark, which screened at the prestigious CANNESERIES in 2020 and premiered on the platform in 2021.