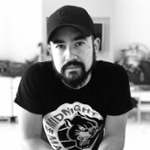 He is currently in production on the controversial documentary series NEVER GET BUSTED!, directed by Stephen McCallum (Outlaws) and Executive Produced by John Battsek (Searching for Sugarman) and Chris Smith (Tiger King), about the Texan narcotics officer that flipped the script on law enforcement and started busting his fellow police.