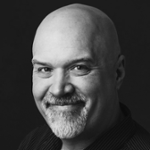 Dan has over 35 years in industry as a creative practitioner, first as a comic book writer/editor at DC Comics and Dark Horse Comics in the U.S., then transitioning to digital storytelling on his arrival in South Australia. From 2001 to 2019, Dan produced a large portfolio of video games and other digital projects for major brand partners such as Atari, LucasArts, Disney and LEGO.

At Flinders Dan manages Flinder University’s motion capture and virtual production stage The Void. This stage has hosted over a number of private industry partner collaborations in the past year, including both of the Epic Game funded Unreal Short Films shot in SA. The Void is the focal point of Flinders acclaimed screen and performance education programs aligning with state-of-the-art industry technology to explore the future of immersive culture and narrative.