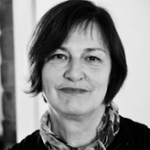 Carolyn Johnson is an award-winning producer of documentaries and dramas.

Her films include Tanna which was nominated for an Academy Award® in 2017. Carolyn’s films have won awards and screened in festivals throughout the world including Venice, Berlin, Busan, London, Hong Kong, Rotterdam, and many others.

Carolyn’s credits include A Sense of Self, A Law Unto Himself, Stumbling in Hillary’s Footsteps, First Footprints, Son of a Lion, and The Last Goldfish.

Carolyn is the Australian Producer of Life in Colour.