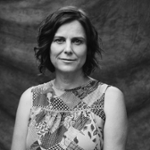 In her role as CEO at Co-Curious, Annabel has been instrumental in designing, implementing and delivering a number of industry development programs. This includes the Behind Closed Doors program which resulted in feature film anthology, Here Out West, which she produced with Sheila Jayadev from Emerald Productions and Bree-Anne Sykes. She has extensive screen industry experience and a
successful history in creating proposals for key arts and film funding bodies. From 2017-2018 she was the Partnerships Manager with CuriousWorks and prior to CuriousWorks, Annabel spent seven years with the Australian Writers’ Guild, where she played a key part in developing their Pathways Program. She also helped lead the establishment of Scripted Ink, which provides world first development opportunities to Australian writers. Annabel has also worked as a Script Department Manager across a number of Australian and international drama products.